The impact of trauma on brain development 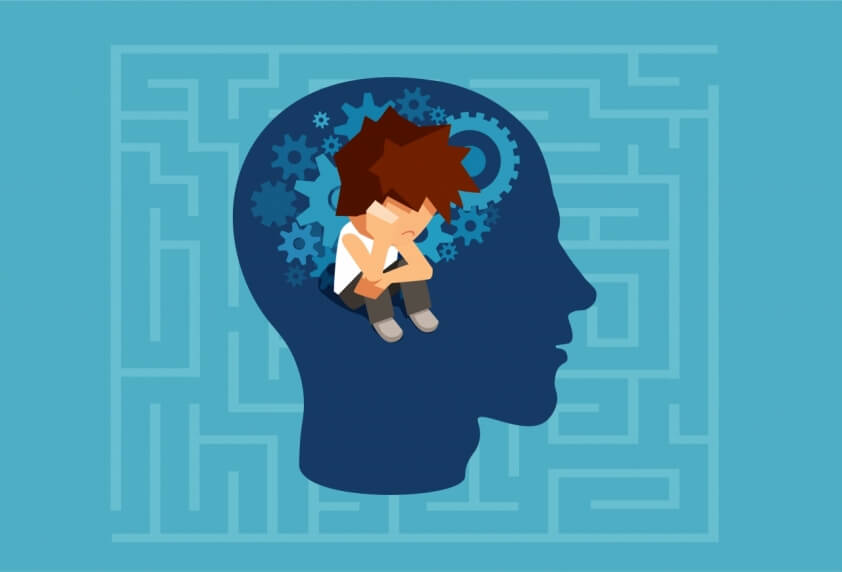 The majority of brain organization takes place in the first four years of life. When stress responses are repeatedly activated over an extended period in childhood, the sequential development of the brain is disrupted. The ladder develops, but the foundational steps are missing and many things that follow are out of balance.

To understand how traumatic experiences affect the brain, we first need to have a closer look at brain development.

The brain develops level by level

The first and middle part is compounded by 2 evolutionary older, to some degree, separate brains which are in charge of the moment-by-moment registration and management of the body’s physiology and the identification of comfort, safety, threat, hunger, fatigue, desire, pleasure and pain.

The Reptilian brain (instinctual) is the most primitive part and is already online when we are born. It is located just above where our spinal cord enters the skull. It is responsible for the body’s physiology: eating, crying, sleeping, waking, and breathing, feeling temperature, hunger, wetness and pain.

All animals that live in groups and nurture their youngest possess a Limbic system or Mammalian Brain. Its development takes off after a baby is born. It is the seat of emotions and the monitor of danger, the judge of what is pleasurable or scary, and the arbiter of what is or is not important for survival. It is shaped in response to experience. This is why we say that the brain possesses Neuroplasticity. For example, if a child feels safe and loved, their brain becomes specialised in exploration, play and cooperation. In contrast, when a child is constantly frightened and unwanted, theirbrain specialises in managing feelings of fear and abandonment. On top of these two layers, seats the Neocortex. It is the last part to develop and occupies only about a 30 percent of the area. It is primarily concerned with understanding how things and people work and figuring out how to accomplish goals, manage our time and sequence actions.

The Reptilian and the Mammalian brain (first and middle layer) make up the “Emotional Brain”. It detects danger releasing hormones that result in visceral sensations that will get the individual moving in a different direction. The emotional brain initiates preprogramed escape plans like the fight/ flight responses.

The Rational Brain, the top layer, starts forming in the second year of life. The frontal lobes enable us to use language and abstract thought. They give us the ability to absorb and integrate information and attach meaning to it. It allow us to plan and, reflect, play out future scenarios, predict what will happen if we take one action. It is also the seat of Empathy, our ability to pick up another person’s emotional state. This is possible thanks to the Mirror neurons which make possible the imitation, synchrony and even the development of language. 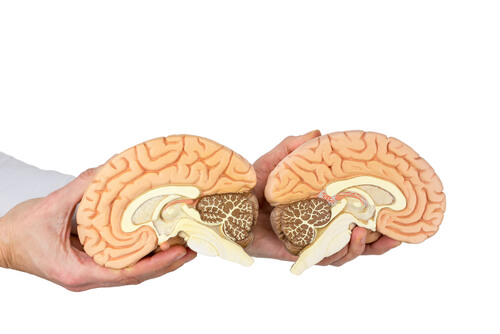 The 2 halves of the brain

If we look at the brain from the outside, we’ll see the right and left hemispheres. Both halves work together and under normal circumstances they speak different languages. The Left hemisphere comes online when children start to understand language and learn how to speak.

It remembers facts, statistics and the vocabulary of events. An immature or deactivated left brain affects the capacity to organise an experience into a logical sequence and to translate feelings and perceptions into words. Without sequencing, we cannot identify cause and effect, create coherent plans or grasp the long term effect of our actions. In technical words, there is a loss of the Executive Functions.

“Left brainers” are the more rational and logical, sequential and analytical people
The Right hemisphere is the first to develop in the womb and it carries the non-verbal communication between mothers and infants. The Right brain stores memories of sound, touch, smell and the emotion they evoke. It reacts automatically to voices, facial features, gestures and places experienced in the past. “Right brainers” are the intuitive, emotional, visual spatial and tactual, the artistic ones.

Interestingly, Scans show that images of past trauma, what we call flashbacks, activate the right side of the brain and deactivate the left side causing a loss of Executive functioning.

The brain in trauma

Now that we understand the layers of the brain and its hemispheres, we are ready to have a closer look at how trauma affects certain parts of the brain. We will be paying a special attention to the following areas:
Amygdala

The Amygdala or fear centre

Located very deep in the brain; its main objective is to determine, in a split of a second, whether a situation, context, person, etc. presents a threat or danger. This area has been called the “smoke alarm detector” because the main job of the amygdala is to “smell,” or detect, danger. The Amygdala will “activate” if it interprets a situation to be threatening, shutting down the functioning of the higher thinking areas of the brain needed for rational though or emotion regulation. At the same time, it activates the stress response in the body. In this way, the body and brain prepare to take action to stay safe by flee/ fight or freeze.

In the traumatised brain, as well as those suffering from anxiety disorders, the amygdala is often hyper-activated. When this occurs, it becomes difficult to think clearly, focus, stay self-aware, and use healthy coping strategies. It may also lead to respond to non-threatening situations, people, or other stimuli as though they are dangerous. For example, if someone was attacked by a dog as a child and develops post-trauma symptoms after this event, they may come to fear all dogs after that, even friendly ones. This is because the amygdala begins to interpret all dogs as dangerous.

Also sometimes called the “timekeeper”. The hippocampus is the main brain structure that stores memories that can be consciously accessed. During times of intense stress or trauma, it becomes under-activated, and can even shrink, causing memory-related difficulties. As a result, memories stored while under stress can be distorted, or not even be stored at all.

The main issue in the traumatised brain is that the Hippocampus is small and under-active, which leads to memory difficulties and other issues. Another problem when the hippocampus becomes de-activated is that it can provide inaccurate information to the amygdala. For example, if the hippocampus is not functioning properly, it may respond to the amygdala inaccurately, informing that a harmless situation or stimulus is dangerous. This causes the person to feel afraid or triggered even when no danger is present.

Insula or the Interoception centre

It allows to be aware of, and connect with, all of the internal sensations and experiences. Examples of interoception are when we feel hungry, warm, or jittery. Without a strong and regulated insula, it is very difficult to identify physical sensations and also emotions. This is because emotions are always experienced in the body as well as the mind!

The Prefrontal Cortex or thinking Centre

This region of the brain is comprised of several smaller structures. The outer, more lateral areas referred to as the dorsolateral PFC are involved in decision-making, concentration, awareness of others, empathy, social intelligence, and other executive functions. The centre areas or ventromedial PFC are involved in self-awareness, self-regulation, and personality.

In traumatized brains, it is common for the PFC to become underactive. When this occurs, it can be difficult to concentrate, make decisions, connect with others, and to be self-aware. When the PFC can’t be accessed, it can be hard to “reason through”. However, when the PFC is activated, clearer thinking, improved attention and concentration, a sense of connectedness to others, and better self-awareness are gained.

This is a high up, cortical area involved in the regulation of emotion and thoughts. The Cingulate functions as a master control centre that attempts to quiet the amygdala, and collaborates with the prefrontal cortex to enhance decision-making and functioning.

The cingulate cortex is often underactive in the traumatized brain. This leads to difficulties with emotion regulation, thought regulation, and decision-making.

In the first years of life, children are fully dependent on caregivers to meet their needs. Experiencing frequent attunement is a basic need, essential to support healthy development. However, parents are not always able to anticipate all of a child’s needs, so the child inevitably gets upset from time to time. Schore and Shore (2008) call this “misattunement”. Well-functioning parents respond appropriately to soothe the baby, which Schore calls “reattunement” (2008).  Misattunement is unavoidable, and not damaging so long as it is followed by prompt reattunement. But ongoing stress (misattunement) without proper reattunement deeply disrupts an infant’s ability to experience being in the centre.

Children who do not frequently experience attunement are unable to form secure attachments (stable relationships). This applies not only to others but also to being able to be attuned to themselves, and to their own needs.Inability to attune to self and others is a precursor to a variety of symptoms with the underlying perception that relationships are not predictable or safe or that life itself is not safe. Beneath the chaos and struggle is a determined effort to connect with others in the only way they know how: reactive engagement.

Childhood trauma is radically different from traumatic stress in adults. Children and young people are very vulnerable to the effects of trauma because of their brains’ development is still in progress. Because of the effect that trauma has on the many areas of the brain mentioned above, it makes sense why trauma in early childhood can result in disrupted attachment, cognitive delays, and impaired emotional regulation. Because most of the brain’s core neural networks and primary associations develop at such a young age, early developmental trauma and neglect have a disproportionate influence on the brain’s organization and functioning.

Neural pathways form at great speed and depend on the repetition of experiences. Given the already discussed neuroplasticity of the brain, experiences teach the brain what to expect and how to respond. When experiences are traumatic, the pathways getting the most use are those in response to the trauma; this reduces the formation of other pathways needed for adaptive behaviour. Also, as it was explained, the overdevelopment of certain pathways and the underdevelopment of others can lead to impairment later in life. Children with histories of abuse and neglect are conditioned to give up when they face challenge later in life. Abused children are often very sensitive to changes in voices and faces; they tend to respond to them as threats rather as cues for staying in sync. Children exposed to intrauterine abuse, drug exposure or even maternal stress, have their brain chemistry and brain structure altered as a consequence.

Psychology Today network (2018). What is developmental Trauma? Retrieved from https://www.psychologytoday.com/au/blog/expressive-trauma-integration/201808/what-is-developmental-trauma

Dealing with your child's meltdowns

Here are some tips f

Independence is the ability to think and act responsibly with confidence and understanding. It is about making your own choices and being able to depend on yourself. As parents, we strive to raise independent children that are equipped to succeed, but how can we teach this valuable life skill?<

Fathers can play an important role in promoting a positive body image in their children believes Dr Richard Fletcher, Senior Lecturer at University of Newcastle and author of The Dad Factor.