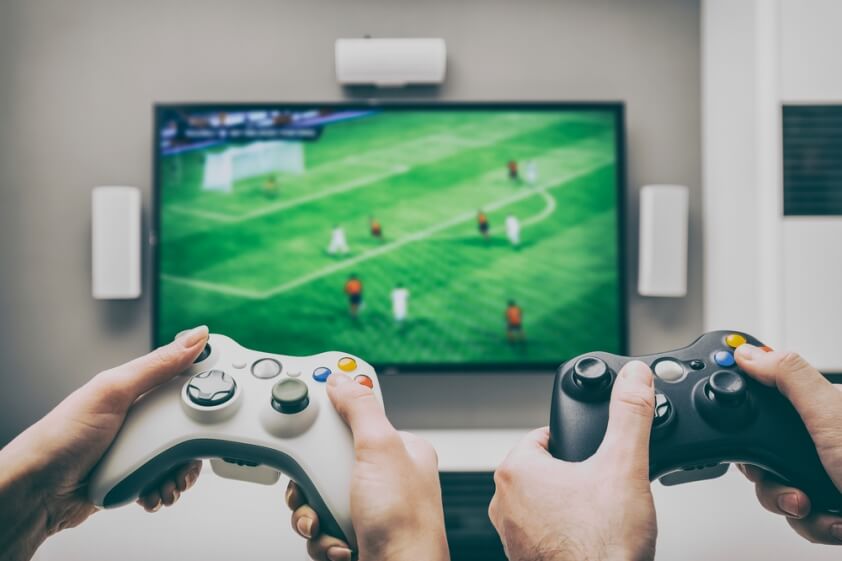 Video games are increasingly a huge part of children’s lives, but many adults do not have an understanding of their potential advantages and disadvantages, what is appropriate for each age group, and why children find them so exciting??

As a lifelong gamer myself, I can definitely recommend the huge potential benefits and fun that comes with games, while recognising that too much of a good thing can also be hugely harmful.  So if you don’t know your Minecraft from your Mario or your Skylanders from your Smash Bros, here’s a gaming 101 to introduce you to the world of games – they’ve come a long way since Pacman!

Video games have been a growing industry and pastime over the last several decades, starting with arcade games, moving to home consoles in the 1980s, and becoming more and more popular over time to become one of the largest entertainment industries in the world.

Who plays games when has changed a lot in the last few decades.  The Digital Australia 2017 Report shows that 93% of Australian households have at least one gaming device. The average age of video game players is 34, and 46% are female. 67% of Australians play video games, with 76% of under 17-year-olds playing games, and 65% of 18-to-64-year-olds. People who play games play for an average of 89 minutes a day.

GAMING: THE TYPES OF CONSOLES

There are many ways that people access games, including on PCs or Macs, on home consoles (Playstation 4, Xbox One), on portable consoles (Nintendo Switch, 3DS), or on phone or tablet devices. In Australia, video games, like other media, are given compulsory content ratings by the Classification Board of Australia; G indicates that the game is appropriate for all ages, PG recommends that parental guidance is recommended for children under fifteen years, and M indicates games with moderate impact that are recommended for children over 15, or for children under 15 only with parental guidance. There are also two restricted categories: MA15+ games contain high impact content that cannot be legally accessed by children under 15 without parental accompaniment for the duration of the game, and R18+ games should not be accessed by children under 18 regardless of parental accompaniment.

GAMING: THE TYPES OF GAMES

Different genres of games are also available.  Role-playing games (RPGs) such as Skyrim offer expansive worlds, a whole cast of characters to interact with, and complex and interesting stories.  First-person shooters (FPS) such as Call of Duty or third-person shooters such as Splatoon provide challenging combat, strategic gameplay, and require good hand-eye coordination.  Platforming games such as Mario test your reflexes, while puzzle games such as Tetris test your problem solving.  Strategy games such as Age of Empires require significant problem-solving skills and often patience to best their challenges, while simulation games such as SimCity require systemic thinking and planning to run their simulated worlds efficiently.  The most recent trend in games are the Battle Royale games, best seen in Playerunknown’s Battlegrounds or Fortnite: Battle Royale, which are 100-person multiplayer shooters where the player is trying to be the last person standing.  There are thousands of different genres and combinations – using the content ratings and gameplay videos to assess their appropriateness for your child can help guide your decision making.  I often recommend the website Common Sense Media as it gives you a clear idea about what content is in the game for you to make an informed decision.

There are several risks associated with playing video games, particularly for children.

In online multiplayer games, particularly games with direct communication with other people, there is a strong possibility to exposure to a toxic environment, with racial and homophobic slurs, sexually violent language, and other inappropriate content common in many gaming communities. The anonymity provided by hiding behind gamertags and avatars can lead to an increase in antisocial behaviour (Barlett, 2013).

ADVICE ON WHAT YOU CAN DO: Turning off voice chat, playing multiplayer games with indirect communication (such as emotes in Overwatch or Splatoon), and choosing games aimed at children such as Minecraft should limit the possibility of exposure to inappropriate content.  Additionally, if your child watches gameplay videos, Let’s Plays, or other gaming content on YouTube or Twitch, it is worth spending some time researching or watching that creator yourself to determine whether they are appropriate your child to watch.

Much has been made about violence in video games, and video games have been blamed by media for many mass shootings. However, the research behind this is significantly more divided than those reports claim.  The American Psychological Association concluded in 2015 that there is an established link between video game violence and aggressive behaviour, although not to criminal behaviour or delinquency.  However, many of the papers used to support the assertion that violent video games increase aggressive behaviour are methodologically flawed.  The methods used to measure an increase in aggression do little to reflect real-world aggression, e.g. putting additional hot sauce on a meal intended for someone who doesn’t like spicy food or giving longer prison sentences to hypothetical criminals (Markey & Ferguson, 2017).

In a meta-analysis, Ferguson (2015) concluded that the effect of violent video games on aggression and a number of other negative outcomes are minimal.  While there can be a short-term increase in non-violent aggressive behaviour, the duration of the impact is short, and the effect size is small; if anything, the release of a new violent video game was associated with lowered violent crime rates in the United States, probably due to people at risk of offending instead staying inside playing games (Markey, Markey, & French, 2015).  In fact, frustration with the gameplay may be more connected to aggressive feelings, rather than the violence of the game; well-designed violent or non-violent games that minimised frustration for the player were associated with higher feelings of competency and lower aggressive feelings (Przybylski, Deci, Rigby, & Ryan, 2014).

Many parents report that their children seem to be “addicted to technology” or “obsessed with games”.  The research on “video game addiction” or “technology addiction” is still emerging, and there is debate about whether gaming addiction represents a true behavioural addiction, in the way that gambling does.  There is not currently any diagnosis that represents this presentation, but research is ongoing.

Microachievements are one way that video games can encourage addictive play (Crenshaw, 2018); some video games, particularly poorly designed ones, offer a sense of achievement for little effort, which can lead to difficulties persisting on challenging real-world tasks when you could just do something easy in a game and gain the same sense of reward.  Over time, this can lead to decreased sensitivity of reward circuitry in the brain, which can manifest in needing more and more frequent achievements to achieve the same effect.  Some games, particularly those with microtransactionsthat encourage players to spend money to play more of the game, are also designed to have a gameplay loop that keeps the player coming back.  However, some research concludes that video games are a symptom, not a cause, of addiction. There is research to suggest that the escapism provided by video games is used to cope with negative environments or low mood and mental health problems, rather than a cause of these issues (Wood, 2008).

Games are intrinsically fun activities and play itself has always been an essential part of learning throughout history and evolution.  There are also a number of advantages specific to video games, beyond the feelings of fun they provide.

Self-determination theory posits that people are intrinsically motivated to play games for three reasons: because games make people feel competent and effective due to the graded challenges that players grow and learn to overcome, because games provide a sense of autonomy and agency due to the independence allowed to make choices in games, and because games allow for a sense of relatedness through competition or cooperation (Przybylski, Deci, Rigby, & Ryan, 2014).  This is particularly true for children, who have limited autonomy in their lives, and even more so for children struggling to feel competent in school or social lives.  Games can provide a sense of community in online play and allow children to connect with peers during multiplayer sessions.

Video games can also help to build skills that are beneficial for school, careers, and life more generally.  Granic, Lobel, and Engels (2014) found a wide range of cognitive benefits for playing games: shooters help train attentional allocation and filtering information and have strong and lasting effects on visuospatial skills, many types of game train problem solving skills and trial and error learning, and video game playing has been associated with enhanced creativity.  The way that many video games are designed mean that they reward continual effort, which helps children understand intelligence as incremental and changeable through effort, as opposed to something innate that you do or don’t have. Games have a way of motivating players despite repeated failures, and gamification of real-world tasks can encourage longer persistence, as seen through apps such as Habitica.

There are numerous potential social benefits from playing games socially, both through building connections with peers and teammates, but also through teaching skills such as teamwork, cooperation, and prosocial behaviour.  Indeed, playing violent video games socially actually negates the connection between violent games and aggressive thoughts, and reduced feelings of hostility (Eastin, 2007; Schmierbach, 2010).  Being engaged in a gaming community, such as an MMORPG (massively multiplayer online role-playing game), can also be associated with engagement in social and civic movements in the real-world (Lenhart et al., 2008).  And let us not forget that games are also fun, and can enhance the player’s mood through success, flow, or achievement.

As my colleague Nadia mentioned in her screen guidelines article last year, setting collaborative limits with your child on sensible use of screen time and video games often leads to more success than power struggles over it.  Giving kids some leeway to allow them to finish a match or a level can often lead to lower levels of frustration and conflict over transitioning off screens. Most of all, I recommend that parents engage with the games that their child is interested in.  This can mean playing a cooperative game alongside your child, watching them while they play, or asking them questions about the game. Children love sharing these worlds with the people they love, and games can be an opportunity for connection and shared excitement rather than conflict!!!

Below are some brief recommendations for games that encourage beneficial skills and are also fun!  I assume most folks know about games like Minecraft, Pokémon, and Roblox, so I’ve tried to pull more obscure recommendations.

While young children can reach milestones at different ages, the CDC says you should talk to your doctor and consider an early-intervention eval

Helping Teens to Regulate Technology Use

One of the most common presenting issues from parents of teens whom we see is that their son or daughter is “addicted to gaming”, or “won’t get off the Ipad and do their homework!”. Parents are often at a loss at what to do, and have resulted in confiscating technology, arguments at

Attachment and Parenting with PACE

According to the Attachment Theory, children are predisposed to seek security from their primary caregivers (Golding and Hughes, 2012). When there is a consistent and sensitive love, a secure attachment will develop in response. A secure attachment provides a sense of